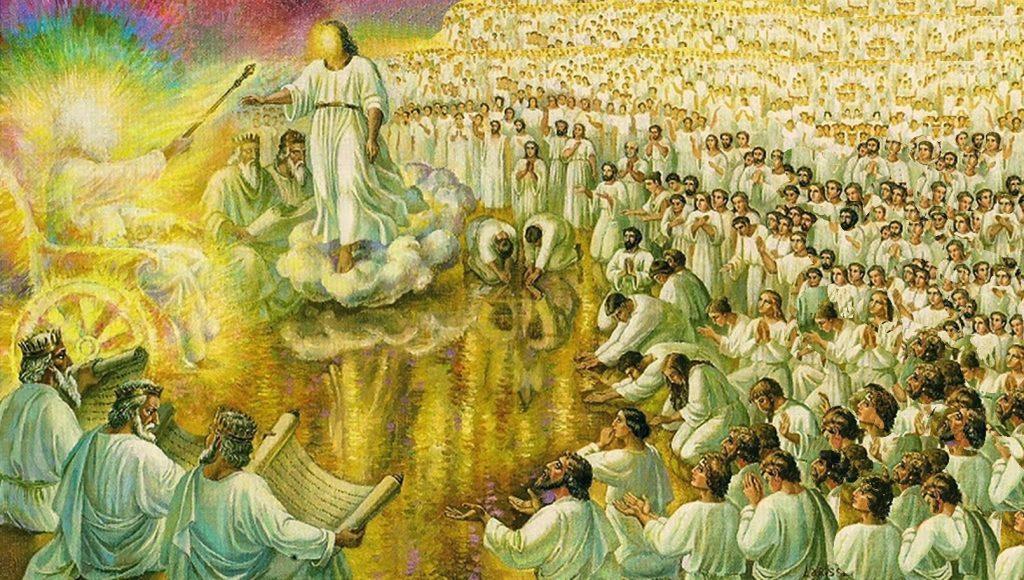 A Tale of Two Songs: What the Worship in Revelation 5 and 15 Reveals About Jesus

The book of Revelation describes several heavenly throne room scenes in which we find worshippers singing hymns of praise that involve the Lamb. But who do these worshippers think the Lamb is in relation to God? What kind of worship do they give him? Does the Lamb himself give worship to another? The two songs recorded in Revelation 5 and 15 offer answers to these important questions. We will examine each one in turn below.

In Revelation 5, the entire heavenly court sings a magnificent song of praise to the Lamb for his work in the drama of salvation. Then all of creation joins together in worshipping both God and the Lamb. This veneration makes it clear that the Lamb is in a permanent position of authority over every created being:

Rev 5:9-15 ESV – And they sang a new song, saying, “Worthy are you to take the scroll and to open its seals, for you were slain, and by your blood you ransomed people for God from every tribe and language and people and nation, 10 and you have made them a kingdom and priests to our God, and they shall reign on the earth.” 11 Then I looked, and I heard around the throne and the living creatures and the elders the voice of many angels, numbering myriads of myriads and thousands of thousands, 12 saying with a loud voice, “Worthy is the Lamb who was slain, to receive power and wealth and wisdom and might and honor and glory and blessing!” 14 And I heard every creature in heaven and on earth and under the earth and in the sea, and all that is in them, saying, “To him who sits on the throne and to the Lamb be blessing and honor and glory and might forever and ever!” 15 And the four living creatures said, “Amen!” and the elders fell down and worshiped [Grk=proskuneo].

Would it be idolatry to worship Jesus in this way if he is not God? Trinitarian apologists often make this argument. But in scripture, the Greek word proskuneo, typically translated “worship” in Rev 5:15, could be legitimately given to others besides YHWH. Strong’s Concordance includes the following description of how the word is used in the New Testament:

Used of homage shown to men and beings of superior rank

Below are several examples from both the Greek Septuagint (also called the LXX) and the New Testament:

1 Ch 16:29 ESV – Ascribe to the LORD the glory due his name; bring an offering and come before him! Worship [LXX=proskuneo] the LORD in the splendor of holiness.

Exo 18:7 ESV – Moses went out to meet his father-in-law and bowed down  [LXX=proskuneo] and kissed him. And they asked each other of their welfare and went into the tent.

Num 22:31 ESV – Then the LORD [YHWH] opened the eyes of Balaam, and he saw the angel of the LORD [YHWH] standing in the way, with his drawn sword in his hand. And he bowed down [LXX=proskuneo] and fell on his face.

The last example listed above demonstrates that it is perfectly acceptable to worship YHWH and his chosen human king at the same time. This is because the people who were gathered to consecrate the new temple were not attempting to worship David as YHWH himself. Rather, they were worshipping David as YHWH’s appointed king who was therefore in authority over them.

Could this dual worship in 1 Chron. 29:20 serve as the background for the simultaneous worship of God and Jesus in Revelation? Two key facts about the Revelation 5 scene reveal the answer:

1. The Lamb is honored only after receiving authority from God’s right hand (Rev 5:7).

Mentioning the “right hand” is an allusion to Psalm 110, the Messianic prophecy in which YHWH seats a human Lord at his right hand to execute judgement on the day of wrath. Bible scholars point out that the Hebrew word used for the “Lord” seated beside YHWH in Ps. 110:1 is not “adonai,” which would refer to God, but rather “adoni,” which is only used of non-divine Lords in scripture.1 Indeed, by alluding to Ps. 110, the scene in Revelation 5 presents Jesus not as God but as the supreme Davidic king who has been enthroned by God.

2. The worshippers think the Lamb is someone other than God.

The worshippers twice distinguish the Lamb from God in 5:9-10. They praise the Lamb for his sacrificial death performed in service to “God” (5:9), and for creating a kingdom of priests to “our God” (5:10). In other words, they don’t think the Lamb is their God; they think the Lamb serves their God.

This does not diminish the magnitude of the worship given to the Lamb. We are told that all of creation joins together in praise to him. The Rev. 5:13 description of “every creature in heaven and on earth and under the earth and in the sea, and all that is in them” evokes Genesis 1:26:

Gen 1:26 ESV – Then God said, “Let us make man in our image, after our likeness. And let them have dominion over the fish of the sea and over the birds of the heavens and over the livestock and over all the earth and over every creeping thing that creeps on the earth.”

The Lamb is thus being contrasted with the first Adam, who was intended by God to rule over all creation but was ultimately deemed unworthy because of his disobedience to the Father. As the second Adam, the Lamb is found worthy to fulfill humanity’s original mandate to rule over creation because of his obedience to the Father, whom he identifies as “my God” in Rev. 3:12.

This worship of the lamb in Revelation 5 is depicted as worship given to a human being. But not just any human being. This is the only human being in all of history who remained 100% faithful to his God from birth to death. He alone is the Last Adam and the supreme Davidic King with right hand authority to rule over all of creation.

The opening scene in Revelation 15 features a hymn identified as “the song of Moses, the servant of God, and the song of the Lamb” (vs. 3). The singers are a group of saints who have conquered the beast and now stand in the throne room of God. The words to their song are as follows:

Rev 15:3-4 ESV – And they sing the song of Moses, the servant of God, and the song of the Lamb, saying, “Great and amazing are your deeds, O Lord God the Almighty! Just and true are your ways, O King of the nations! Who will not fear, O Lord, and glorify your name? For you alone are holy. All nations will come and worship you, for your righteous acts have been revealed.”

Grammatically, the phrase “song of the Lamb” (Grk = ode ho anion) could be understood as a song about the Lamb or a song by the Lamb. But several contextual facts show that the latter option is the correct one:

Since the subject of the song in Revelation 15 is the “Lord God the Almighty,” this means it cannot be about the Lamb.

No one would suggest that the song is about Moses, despite the fact that it’s grammatically possible, because the subject of the song is the Lord God. Scholars note that the Revelation 15 hymn draws from themes found in the Exodus 15 Song of Moses, which begins this way:

3. In Psalm 22, the resurrected Messiah sings a song of praise to YHWH that parallels the Rev. 15 song.

The parallels between the Psalm 22 song and the Revelation 15 song show that the Lamb is not the subject of the song but rather the singer:

A Song By Moses and the Lamb

The Exodus 15 song of Moses and the Psalm 22 song of the Lamb3 present these respective figures as human beings directing praise to their God YHWH. The Revelation 15 song, which combines themes from these two hymns, is no different.

The song continues by declaring of the Lord God that “you alone are holy [Grk=hosios].” The word hosios is defined by Thayer’s Greek Lexicon as “undefiled by sin, free from wickedness, religiously observing every moral obligation, pure, holy, pious.”

Although this word is also applied both to Christ and his followers elsewhere in scripture (Acts 2:21, 1 Tim 2:8, Tit 1:8), the point in this hymn is that only God is inherently holy. That is, moral purity is an essential attribute of God. He is holy simply by virtue of his divinity, while every other holy being must be made so by him.

Moses had many moral failings, but the Lamb was morally pure from birth to death. Yet in this song even the Lamb acknowledges that his holiness is not an essential property; he must derive it from God, who alone is inherently holy.4 This confirms that the Lamb is not God but rather the Last Adam, formed by God in a sinless state and empowered by God to remain holy throughout his life.

In Revelation 15, Moses and the Lamb point to another as the only one who is inherently holy and encourage the singers to glorify his name above all. The OT songs that form the basis for the Revelation 15 hymn mirror this sentiment. Moreover, the very fact that the Lamb joins with Moses in a song of worship to God indicates that the Lamb is not understood to be God in the book of Revelation.