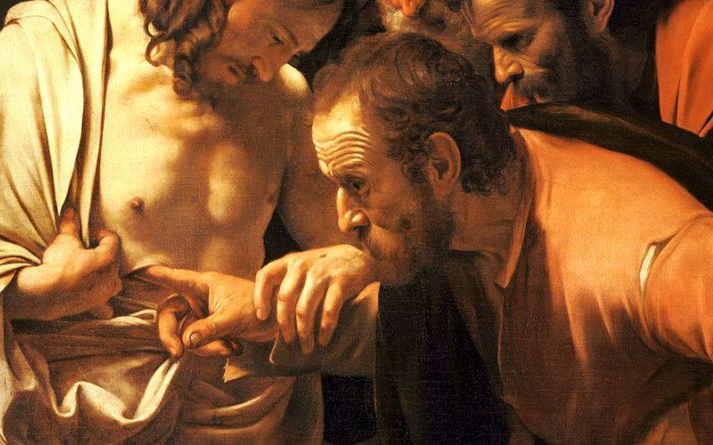 In John 20:28, Thomas beheld the resurrected Christ and famously exclaimed: “My Lord and my God!” One way to interpret this statement is to assume that Thomas was applying both titles to Jesus. Trinitarian apologists naturally choose this option, and further claim that Thomas was therefore identifying Jesus as YHWH God himself.

But Thomas didn’t say “You are my Lord and my God.” Thus there is another possibility which, as we will argue, turns out to be the far more likely one – that he used two different titles because he was referring to two different individuals. On this reading, Thomas honored both the Son and the Father together by acknowledging the former as his Lord and the latter as his God.

Why should we think Thomas was doing this? Below we will examine the contextual reasons, beginning with the Old Testament background and working our way inward to the immediate context of the scene in question.

From the time the Davidic monarchy was first established, YHWH and his chosen human king were closely connected in the eyes of the people. This was due in part to the Father-Son relationship that God had with the Davidic kings:

2 Samuel 7:12-14 ESV — . . .I will raise up your offspring after you, who shall come from your body, and I will establish his kingdom. He shall build a house for my name, and I will establish the throne of his kingdom forever. I will be to him a father, and he shall be to me a son. When he commits iniquity, I will discipline him with the rod of men, with the stripes of the sons of men…

The king would rule over the people, but he would do so on God’s behalf and by his authority alone. Consequently, the people often honored both figures at the same time. One such example involves the entire congregation of Israel worshipping YHWH and King David together:1

A similar scene depicts Ahimaaz prostrating himself before David while at the same time honoring YHWH. Notably, he referred to YHWH as “God” and David as “Lord”:2

2 Samuel 18:28 ESV — Then Ahimaaz cried out to the king, “All is well.” And he bowed before the king with his face to the earth and said, “Blessed be the LORD [YHWH] your God, who has delivered up the men who raised their hand against my lord the king.”

Conversely, those who cursed God and his king would be judged harshly. Jezebel had an innocent man falsely accused of this crime, while Isaiah prophesied that others would indeed commit it:

1 Kings 21:9-10 ESV — And she wrote in the letters, “Proclaim a fast, and set Naboth at the head of the people. And set two worthless men opposite him, and let them bring a charge against him, saying, ‘You have cursed God and the king.’ Then take him out and stone him to death.”

Isaiah 8:20-22 ESV — . . .They will pass through the land, greatly distressed and hungry. And when they are hungry, they will be enraged and will speak contemptuously against their king and their God. . .And they will be thrust into thick darkness.

The OT also anticipated that Israel would continue to recognize this close connection between God and his chosen king in the eschatological future. Such passages are likely rooted in the Messianic Psalm 110:1, which prophesied that a Davidic king would be seated at YHWH’s right hand:

Psalm 110:1 ESV — A Psalm of David. The LORD [YHWH] says to my Lord: “Sit at my right hand, until I make your enemies your footstool.”

Jeremiah 30:7-9 ESV — Alas! That day is so great there is none like it; it is a time of distress for Jacob; yet he shall be saved out of it. . .But they shall serve the LORD [YHWH] their God and David their king, whom I will raise up for them.

Hosea 3:5 ESV — Afterward the children of Israel shall return and seek the LORD [YHWH] their God, and David their king, and they shall come in fear to the LORD and to his goodness in the latter days.

Jeremiah and Hosea predicted that Israel would acknowledge and serve two figures in the last days: YHWH, who is identified as “their God,” and a king from the line of David,3 who is presented as someone other than YHWH and is addressed as “my Lord” in Psalm 110:1.

New Testament Context: Our Lord and Our God

This “God and the king” pattern continues right into the New Testament. The Davidic lineage of Jesus is emphasized throughout, and the Father and Jesus are repeatedly mentioned together using the titles “God” and “Lord”:4

James 1:1 ESV — James, a servant of God and of the Lord Jesus Christ, To the twelve tribes in the Dispersion: Greetings.

We have therefore established that:

1) In the Old Testament, Israelites often acknowledged YHWH and the king together, distinguishing them by the titles “God” and “Lord” respectively.

2) This dual honor was prophesied to continue into the future.

3) The New Testament frequently gives such dual honor to the Father and Jesus, distinguishing them by the titles “God” and “Lord” respectively.

But is there evidence that Thomas was doing the same in John 20:28? For this we turn to the gospel of John.

We may first observe that the gospel of John is concerned with Jesus’ identity as the prophesied Messianic king from David’s line:

John 7:42 ESV — Has not the Scripture said that the Christ comes from the offspring of David, and comes from Bethlehem, the village where David was?”

John 1:49 ESV — Nathanael answered him, “Rabbi, you are the Son of God! You are the King of Israel!”

John 12:13 ESV — So they took branches of palm trees and went out to meet him, crying out, “Hosanna! Blessed is he who comes in the name of the Lord, even the King of Israel!”

This indicates that we should keep an eye out for the dual “God and the king” pattern established by the Old Testament. And indeed it turns out to be a prominent feature of the scene leading up to the crucifixion. After the Last Supper, Jesus addressed his disciples in order to prepare them for what was about to happen:

John 14:1-5 ESV —  “Let not your hearts be troubled. Believe in God; believe also in me. In my Father’s house are many rooms. If it were not so, would I have told you that I go to prepare a place for you? . . . Thomas said to him, “Lord, we do not know where you are going. How can we know the way?”

In this passage, Jesus instructed Thomas and the other disciples to believe in two figures: God and himself. Thomas replied by addressing Jesus as “Lord,” but still expressed doubt about what was going to take place. The net result is that Jesus challenged Thomas and the others to believe in one individual who was called “God” and another individual who was called “Lord.”

A few chapters later, Jesus reiterated his point in his high priestly prayer:

John 17:3 ESV — And this is eternal life, that they know you, the only true God, and Jesus Christ whom you have sent.

Thus Thomas was told not once, but twice, that salvation requires faith in two distinct individuals: his God (the Father) and his Lord (Jesus). But his nagging doubts intensified when Jesus was subsequently arrested and crucified as a pretender to the throne of David (Jn. 19:15-21).

Immediate Context: The Scene in Question

John 20 describes the resurrected Jesus encountering his disciples for the first time. Mary Magdalene discovered him very much alive in the garden, where he gave her an important set of instructions:

John 20:16-18 ESV — . . .Jesus said to her, “Do not cling to me, for I have not yet ascended to the Father; but go to my brothers and say to them, ‘I am ascending to my Father and your Father, to my God and your God.‘” Mary Magdalene went and announced to the disciples, “I have seen the Lord” — and that he had said these things to her.

Mary told Thomas and the others that the risen “Lord” was ascending to their “God.” In other words, she explicitly identified Jesus as Thomas’s Lord and the Father as Thomas’s God, just hours before the scene in question.

But Thomas’s faith had been ravaged by the crucifixion. Would God have allowed the Romans to execute the supreme Davidic king of Israel? Now Thomas was being told that their God had in fact raised Jesus from the dead. He found this claim virtually impossible to believe (Jn. 20:25).

Then the resurrected Jesus appeared to Thomas. All doubt evaporated and he realized this was no pretender to the throne; Jesus really had been appointed king by YHWH himself. Thomas’s awestruck reaction in John 20:28 therefore acknowledged “my Lord” Jesus and “my God” the Father, in the ancient pattern of honoring YHWH and the king together, and in fulfillment of the exhortations he had received before Jesus’ death.5

When John 20:28 is used as a prooftext to bolster the doctrine of the Trinity, it is inevitably stripped of its rich Biblical context. Only by digging beneath a superficial reading do we discover that John’s gospel is focused upon the dual honor given to “God and the king” as found throughout the rest of scripture.

This honor was required of Thomas by no one less than Jesus himself in John 14:1 and John 17:3, anticipating the climactic moment when Thomas finally offered such honor to the two individuals previously identified for us in John 20:16-18 as none other than the Lord Jesus and God the Father.