The baptismal formula in Matthew 28:19 is often thought to be obvious evidence of God’s triune nature. In this passage, Jesus commissions his apostles to baptize people “in the name of the Father and of the Son and of the Holy Spirit.” The singular noun name, we are told, implies that all three figures share the same name, which in turn implies a shared essence or being.

Thus it is alleged that Matthew 28:19 presents the One God of Israel as three persons. But what if it turns out that Jesus, the apostles, and the early church all exclusively identify the One God of Jewish monotheism with just one of the figures in this famous baptismal list? Three significant facts show that this is indeed the case.

1. Jesus came in the name of the Father, whom he called the “Only True God.” 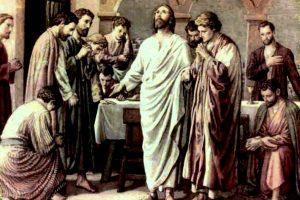 The idea that Jesus referred to a single name shared by the Father, Son, and Holy Spirit in Matthew 28:19 runs headlong into conflict with the rest of the New Testament. There we find Jesus routinely distinguishing his name from his Father’s name, and repeatedly emphasizing that he came in the name of the Father alone:

I have come in my Father’s name, and you do not receive me. If another comes in his own name, you will receive him. — John 5:43

Jesus identified himself as one who came in the name of the Father. That is to say, Jesus claimed to represent Yahweh by speaking and acting on his behalf. This follows the precedent of Israel’s prophets who had gone before him. For example, the prophet Jeremiah spoke to the people “in the name of the LORD” (Jer. 44:16) and David confronted Goliath by announcing that “I come to you in the name of the LORD of Hosts” (1 Sa. 17:45).

To say that you come in the name of someone is to acknowledge that you are not that someone. You are instead that someone’s designated agent. In Deut. 18:18-19, God foretold that the Messiah would be just such an agent who would “speak in my name.” 1 God and his Messiah are by definition two distinct beings, for you cannot be the one whom you send to speak on your behalf. It is therefore unsurprising that Jesus identified the Father — in distinction from himself — as Israel’s One God:

When Jesus had spoken these words, he lifted up his eyes to heaven, and said, “Father, the hour has come; glorify your Son that the Son may glorify you…And this is eternal life, that they know you the only true God, and Jesus Christ whom you have sent.”  — John 17:1, 3

The New Testament portrays Jesus and Yahweh as two distinct beings with two distinct names. The name Jesus is applied exclusively to the Messiah. But the name Yahweh is, in the words of the exalted Jesus, “the name of my God” (Rev. 3:12). This confirms that Jesus was not presupposing a shared name in Matt. 28:19; rather, he regarded the Father alone to be Israel’s One God in this famous baptismal list.

2. The apostles didn’t use a trifold forumula when they baptized. 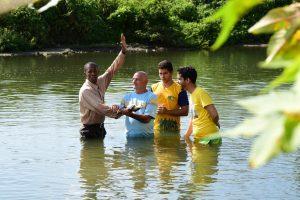 The baptisms recorded in the book of Acts give us a window into how the apostles perceived the words of Jesus in Matthew 28:19. If indeed Jesus was introducing a triune formula, we would certainly expect to find the apostles repeating it. But surprisingly, Acts reports that they performed baptisms in the name of Jesus alone:

And Peter said to them, “Repent and be baptized every one of you in the name of Jesus Christ for the forgiveness of your sins, and you will receive the gift of the Holy Spirit. — Acts 2:38

And he commanded them to be baptized in the name of Jesus Christ. Then they asked him to remain for some days. — Acts 10:48

On hearing this, they were baptized in the name of the Lord Jesus. — Acts 19:5

It turns out that the full Matthew 28:19 formula is never once stated at any baptism recorded in scripture. This makes it very unlikely that it was ever meant to be repeated verbatim, let alone considered a technical formula describing the nature of God.2 But neither did the apostles think that baptism in the name of Jesus alone somehow suggested that he was one member of a multi-personal God – Paul recognized that Israelites had previously been baptized into Moses (1 Cor. 10:1-2) and later into John the Baptist (Acts 19:1-3).

Indeed, when we consider the evangelistic messages delivered by the apostles just prior to performing a baptism, we find that they identify Jesus as a human being and expressly distinguish him from God, whom they identify as the Father. A prime example comes from Peter’s evangelistic sermon in the book of Acts:

22 Men of Israel, hear these words: Jesus of Nazareth, a man attested to you by God with mighty works and wonders and signs that God did through him in your midst…32 This Jesus God raised up, and of that we all are witnesses. 33 Being therefore exalted at the right hand of God, and having received from the Father the promise of the Holy Spirit, he has poured out this that you yourselves are seeing and hearing….37 Now when they heard this they were cut to the heart, and said to Peter and the rest of the apostles, “Brothers, what shall we do?” 38 And Peter said to them, “Repent and be baptized every one of you in the name of Jesus Christ…  — Acts 2:22, 32-33, 37-38

Contrary to the practice of most modern protestant churches, the apostles never once repeated a technical formula such as “I baptize you in the name of the Father and of the Son and of the Holy Spirit.” They simply explained in their gospel presentation how each figure participated in the plan of salvation. And in these explanations, God is never once said to be three-in-one, triune, multipersonal, or anything remotely similar. Rather, he is identified as a singular personal being otherwise known as the Father.

3. The apostles and early church identified the Father alone as the One God. 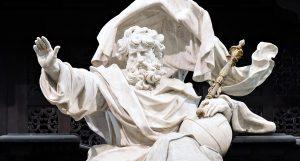 All mainstream protestant denominations agree that there is only one true God. In this respect they acknowledge the significance of ancient Israel’s foundational creed known as the Shema: “Hear O Israel, the LORD [Yahweh] our God, the LORD [Yahweh] is one” (Deut. 6:4).

Yet according to Trinitarian theology, Matthew 28:19 squeezes the Father, the Son, and the Spirit into this One God. But such an assumption must be read into a verse that never actually says anything of the sort. Moreover, the remainder of the New Testament explicitly upholds the ancient definition of the One God as the Father alone:

The second and third century church fathers understood the One God in exactly this way. Despite their evolving philosophical speculations about the nature of the Son, they invariably identified the One God of Israel as the Father and clearly distinguished him from Jesus Christ:

“[T]here is one God, who has manifested Himself by Jesus Christ His Son.”

— Ignatius to the Magnesians, ch. VIII

“Let all the nations know that you are the only God, that Jesus Christ is your servant, and that we are your people and the sheep of your pasture.”  — 1 Clement 59:4

“To the only God, invisible, the Father of truth, who sent forth unto us the Savior and Prince of immortality. . .” — 2 Clement 20:5

“Both the Lord [Jesus], then, and the apostles announce as the one only God the Father. . .” — Irenaeus, Against Heresies, Bk. IV, Ch. XXXVI

“[The apostle Paul] avoids inculpating the regular mysteries of the faith, and affirms that there is, notwithstanding, but one Christ and His one God. . .”

“. . .those who, being taught in the school of Jesus Christ, have rejected all images and statues, and even all Jewish superstition, that they may look upward through the Word of God to the one God, who is the Father of the Word. . . .”

The remainder of the New Testament is crystal clear in its presentation of the One God as the Father alone. This understanding continued into the first three centuries of the church, before the novel idea of a three-in-one God was put forward in the fourth century. Thus there is no basis for supposing that the apostles or the ante-nicene church thought the One God in Matthew 28:19 was anyone other than the Father.

The evidence discussed in this article confirms that the phrase “in the name of” in Matthew 28:19 is not attempting to radically redefine how many persons constitute the One God of Israel. But how then should it be understood? A more reasonable answer draws upon the Hebraic principle of agency whereby one who comes “in the name of” someone comes “in the power of” or “in the authority of” that person.

The list given by Jesus is arranged in hierarchical order. The Father – that is, the One God of Israel – is the sole source of all power and authority. He permanently bestowed this upon Jesus at the exaltation, and Jesus then exerted it in the world by means of the Holy Spirit. Nothing about this arrangement of delegated authority requires the foreign notion that all three figures constitute the same being.

Moreover, rather than being perceived as a Triune formula, the Biblical and historical evidence unanimously indicates that Matthew 28:19 was originally understood as follows: “Go therefore and make disciples of all nations, baptizing them in the name of the One God and of the Son and of the Holy Spirit.”